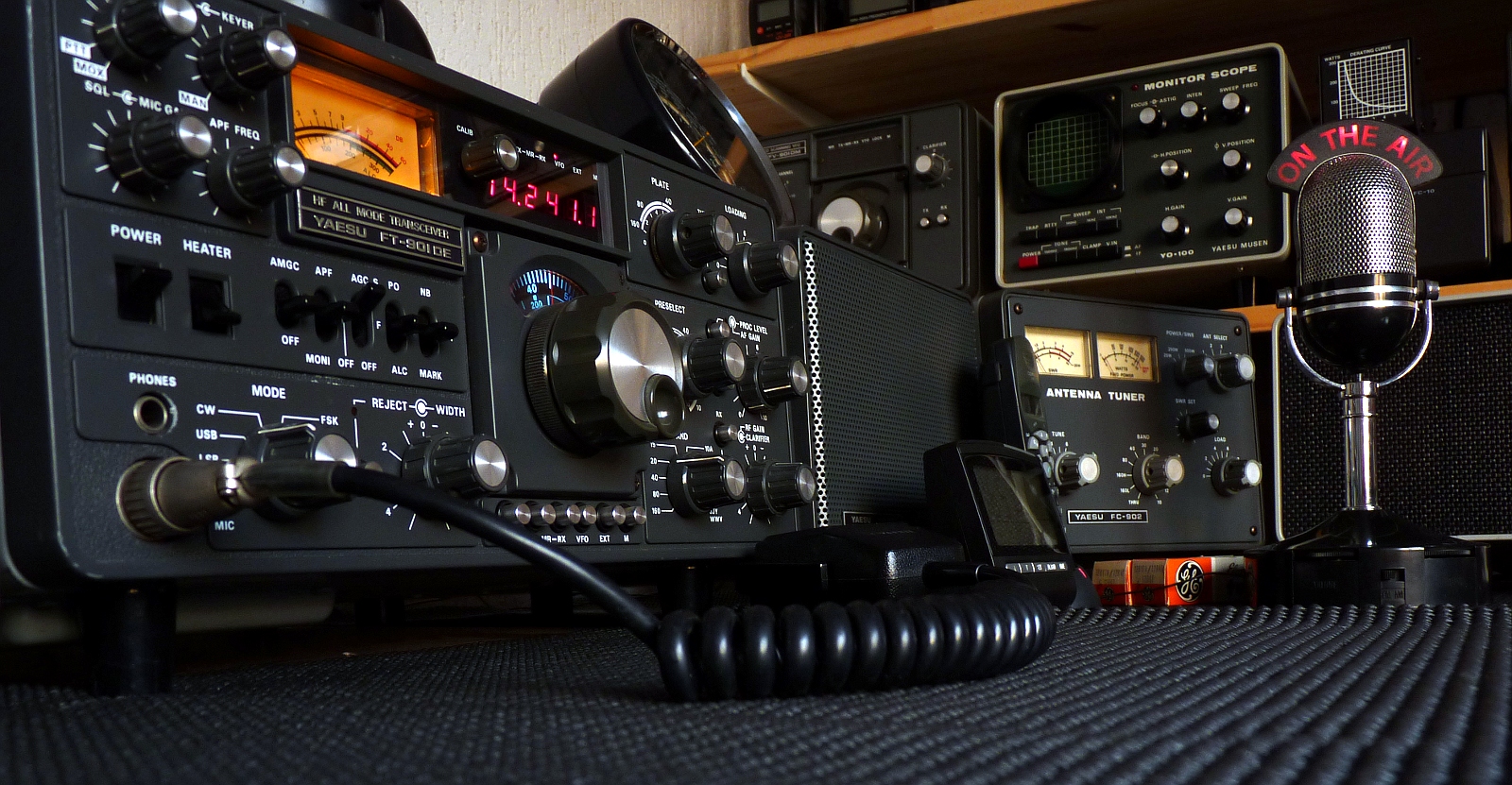 In late 2019, I completed the ham radio Technician and General tests and to be honest I’ve yet to get started on the Extra Class test. if you are new to ham radio, then check out hamexam.org and sign up, it’s free. You can take your tests on a phone or tablet until your hitting 90s and then go schedule to take the test at a local comm center or ham club. They charge just $15 to test, and they often let you also take the next higher level test free of charge.

I managed to buy and set up a Yaesu FTM-100DR 2m/70cm radio, and a Yaesu FT450D HF radio. I put a SCU-17-USB sound card on the HF radio I and got a Panasonic Toughbook hooked up. so I can hit e-mail RMS gateways out in the Midwest and the Southeast over HF for e-mail using Winlink.  APRS is pretty useful over the 2m band. (More on this later).

I also put an inexpensive 25-watt Chinese transceiver in my truck. But that is mostly used as a scanner for keeping an ear out on local information. That was an idea that I picked up from Sam Culper of forwardobserver.com. Everyone is a sensor.

I’ve managed to get a flag pole modded to secure a diamond $100 antenna for my 2m/70cm radio. It’s got a pretty good SWR of like 1.1. For the HF radio it took a lot of work, and some trial and error, but I managed to get a 550 cord pull up about 35 feet high in the trees, and pulled up a Buckmast OCF dipole antenna.
I can’t transmit on the 160m band but I can get out on the 40 and 80m bands when they are good. I’ve talked to Washington State, Texas, Louisiana, Costa Rica, and Canada. when 10 and 6m are open, it’s interesting and really cool to hear other states and other countries-  I’ve read or heard on the radio that 2019 was the worst year for [long distance propagation] radio since radio was invented with no sunspot activity for all of the year.

In my research on ham radio, I wanted to get some kind of BBS system setup.  I found that that it’s not plug and play, nor are people really doing much with it over VHF/HF, making it hard for me to get in to. The solution I keep seeing is buying a modem from this company and it does BBS so you can have e-mail. But I really don’t want to buy anything else. I want to do stuff.  So I guess those BBSs are rare now. My basic idea is having local information using 2m/70cm and having national and international information using HF.
if you plan on copying this idea you will have to figure out what local nets are out there and monitor frequencies like 14.300 daily (as this is where the maritime mobile service network has nets that usually cover national weather broadcasts from the NWS and reports on ocean-related events like storms. I listened to broadcasts when the last hurricane hit the Bahamas)

I shoudl mention that AmRRON.com has a ton of info if your getting started in ham radio or just want info on state nets. Also, if you are just starting out and want to talk internationally get a WiresX compatible Yaesu radio (such as a FTM100-DR) and a Technician license. With that, you can chat over your laptop using a handheld — or hook in to a digital repeater with Internet access and talk to people in Germany, Japan or wherever. WiresX stuff is good as long as the power is up, and you have Internet. You can connect in to chat rooms that kind of remind me of old AOL chat rooms days, online.

My desired end game was to have survival material available for download over HF/VHF using a BBS I wanted to run out of my basement, but  that’s probably not happening. I hope the ARRL comes out with a BBS-over-radio option, like they are pushing FT8 digital communications. (FT8/4 are fun, but to me don’t really equate to being useful for a local nor national emergency.)

Then I started thinking about how YouTube, Twitter, Spotifiy, and Google are all banning the Alex Jones infowars.com site, and their shows. So what I could do to bypass Internet censorship? I started asking around the ham community: How do people on ships get news? I hit YouTube and did some web searching. I learned that they use saildocs.com and they use FTPMAIL servers. So if you want to try out what they offer…email them  info@saildocs.com or query@saildocs.com and see what they send you back. They should give you a catalog of pages and instructions on typing ‘get’ or info and whatever page name you want to read.

Hams in the U.S. are limited by restrictions on sending commercial ads, over radio. And I would hope that someone sets up a text-only news web site like drudgereport.com. By the way, I learned that is banned/blocked on saildocs, along with infowars.com. They only allow reuters.com, for news.) You can use the info@saildocs.com and just put a web page for a text-only e-mail back in response to your e-mailing them. The system is based on 1990s technology, but I’ve yet to find any real documation on it so I can set up my own small scale operation.

I’ve contacted ARRL and I’ve found that both saildocs and the National Weather Service use this same tech. Sailors on ships use them both over HF to get weather and basic info about tides, low-speed Internet news without ads and even [limited] video. Everyone else isn’t limited by Internet so anyone can get info from these sites. I’ve contacted infowars via phone, and send them an actual letter, relating: “iI’s not like I have a server setup so I’m saying I’m seeing it done in two sites, and maybe this would be a good idea”. Not that I presently have this ability, and I want to share how-to. I’m just pointing them in the right direction. To me, the cool idea about using FTPMAIL is that you do not need to use any radio for slow Internet connection, just any networked PC. They might block web sites, but they aren’t blocking e-mails, just yet.

As far as APRS goes, I was able to get free software downloaded, installed and using my USB connection to the VHF/UHF radio I can get and send APRS packet messages, I can also get tactical real-time info from weather stations across a wide area and see on a map on my laptop, the local radios in use! it’s nice to see that because of having visual on-screen info, I could add them to my radio and use it to make contacts about two and half hours drive since I’ve got a high elevation and their towers are pretty high in the distance off the western mountains from my location. (right on the backside of a ski resort).

What’s good for preppers about APRS is that you can use it to find repeaters, as they will put the info out on them saying here is 147.150 PL121 it’s a Yaesu wires-X digital repeater or it’s a WINLINK RMS GATEWAY for e-mail. They give you info on how far and what direction it is from your location. “Hey Jim what’s up?”: Yeah you can send a text message over it. But to be honest that part of radio I found to be hard to use for sending and getting a text message. if you are hooked to a laptop, then you’re in business. But while it’s in your car… The FTM100-DR has a bluetooth mod. I wonder if it supports a bluetooth keyboard? A Yaesu for $350 it should come fully loaded.

It will beacon your position every 5 to 10 minutes, or each time you move depending on how the radio is configured. And it has built-in GPS.

Another good thing about APRS is there is an Android application: You can get a TNC3 from mobilinkq  http://www.mobilinkd.com/(http://www.mobilinkd.com/)  and hook up a HT radio to it, and use it for your location. I’m almost on the Pennsylvania/New York line, and because it shares packet info over digipeaters I can see radios on the upstate NY/Canada border, south into West Virginia/ Delaware and most of my state of Pennsylvania.

A hat tip to WB4APR Bob Bruginga for creating a really cool tool. Now if Toyota would make updates so radios could just be added and plugged into the Tacoma and Tundra dash displays, I think it would be sweet setup for anyone traveling with friends cross country. I’m not sure if they would mod their weather, news apps since they don’t work without digital signal and Toyota hasn’t figured out we carry a gateway with us every time we are in a truck with a mobile phones. (You’d think someone would have said, “Oh yeah just point them over their bluetooth connection to this web site.”) We already have maps in the dash display why not use them for APRS, phone has GPS already built-in to it, too. Plug in a HT radio, roof-mounted magnetic antenna and put it on  144.39. Toyota should adopt using phones for Internet gateways, it would be nice having those dash apps for weather and news actually working.

Okay, back to it:
I’m thinking outside the box here wondering why no one has added the FTPMAIL servers to their tools to help spread information. Given the curent socio-political turmoil, I’m thinking that people across the USA are going to need an e-mail-based news solution that bypasses censorship. Something like this could be used by winlink over telnet on any internet connection or winlink via HF over radio for slow speed internet.

One last thing: I’ve read that winlink is also able to be set up as a peer-to-peer direct contact system. It is used heavily by ham radio guys doing EMCOMM work and will likely be the standard at some point for digital communications over HF or internet. Anyhow, the reason I wanted to put this out is because I’m stalled on finding information on how to get info over HF or via internet (if grid up). I might spend some time this week looking for how to setup my system for BBS and ask around because maybe someone is still running one some place. I’m not overly optimistic at the future, with what’s being said online, and what’s being done by bad government (and it’s not just in Virginaia it’s PA, KY, Mi, MO, NM…seems some guy named Soros is buying up state level players like DAs across the US, how about that guy. Pfft.)

What I would love to hear is how people using HF can get text-based info using some kind of news nexus. The bad news is it would probably be CNN.. If it’s not, then it would be epic if someone had set it up to have FTPMAIL so news stories could be passed to users as needed..a free and open system.  Maybe OAN or Epoch times will do something like this. By the way Epoch times is not banned by saildocs.com

So far I’ve asked this question about FTPMAIL to infowars, the ARRL, and a few guys online. I don’t really think this is much of an article for advanced hams, but if you need material it’s all good.

Oh, and a closing note: If civil war breaks out over the next few weeks or months, then turn off APRS, or use it in receive-only mode. it might not be a good idea to transmit for a while.